Richard P. Feynman, an American theoretical physicist born in New York on 11th May 1918. He completed his B.Sc. from Massachusetts Institute of Technology in 1939 and his Ph.D. from Princeton University in 1942.  He worked as Research Assistant at Princeton (1940-1941), Professor of Theoretical Physics at Cornell University (1945-1950), Visiting Professor, and then Professor of Theoretical Physics at California Institute of Technology (1950-1959). 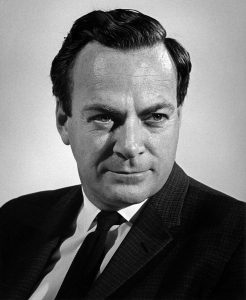 Professor Feynman was one of the greatest scientists and physicists and a truly great mind of humanity.

The first principle is that you must not fool yourself — and you are the easiest person to fool.

The great Professor made his mark as an original genius, by starting his work on the Manhattan Project in his twenties, and then winning a Nobel Prize for developing an understanding of quantum mechanics. He is most known for his work in the path integral formulation of quantum mechanics, the theory of quantum electrodynamics, the physics of the superfluidity of supercooled liquid helium, as well as his work in particle physics which is known as the parton model.  He developed a widely used pictorial representation scheme of mathematical expressions describing the behavior of subatomic particles, which later is named the Feynman diagram.

I don’t like honors…I’ve already got the prize: the prize is the pleasure of finding the thing out, the kick in the discovery, the observation that other people use it. Those are the real things.

Very efficiently describes the personality. Thank you for posting.