Peter Higgs is well known as a theoretical physicist. Matter, according to contemporary physics, is made up of a collection of particles that serve as building blocks. Forces exist between these particles and are mediated by another set of particles. The majority of particles have a mass, which is a basic characteristic. In 1964, a theory was proposed by Peter Higgs and the team of Francios Englert and Robert Brout about why particles have mass. In 2012, the CERN laboratory experimentally confirmed the existence of Higgs particle and got Nobel Prize in physics in 2013. 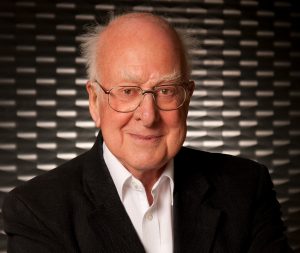 Peter Higgs was born on 29 May 1929 in Newcastle upon Tyne’s Elswick area. In 1950, he earned a First Class Honours degree in Physics from King’s College, University of London. He got him an MSc degree a year later and immediately began research, first under the direction of Charles Coulson and then under the supervision of Christopher Longuet-Higgins. In 1954, he received a Ph.D. for his thesis titled ‘Some Problems in the Theory of Molecular Vibrations,’ which sparked a life-long interest in the application of symmetry concepts to physical systems.

In 1954, Peter Higgs enrolled at the University of Edinburgh for his second year as a Senior Student of the Royal Commission for the Exhibition of 1851 and stayed for an additional year as a Senior Research Fellow. In 1956, he went to London to take up an ICI Research Fellowship, spending a year at University College and little more than a year at Imperial College before accepting a position as Temporary Lecturer in Mathematics at University College. Peter Higgs returned to Edinburgh in October 1960 to take up a lectureship in mathematical physics at the Tait Institute.