Published by Abeeha Ibrahim on 20 September, 2021

Dr. Uğur Şahin was born on the 29th of September, 1965, in Iskenderun, Turkey. Dr. Şahin and his mother moved from Turkey to Cologne, Germany, when he was four years old, to join his father who, at the time worked at Cologne’s Ford factory.

Dr. Şahin grew up with an interest in popular science books. He pursued his interests and studied medicine at the University of Cologne from 1984 to 1992. Following this, he went on to receive his doctorate in 1992 for his work on immunotherapy in cancer cells.

Dr. Şahin co-founded his two major companies in 2001 and 2008 with his work partner and spouse Özlem Türeci. In 2001, the two established Ganymed Pharmaceuticals, a company that focused on the creation of medications to treat malignant growth utilizing monoclonal antibodies. Whereas in 2008, the two, alongside Christoph Huber, founded the biotechnology company BioNTech, based in Mainz, Germany.

The two met during Dr. Şahin’s work at the Saarland University Hospital in Homburg, whilst Dr. Türeci completed her final year of studies.

Dr. Türeci, well known as the chief medical officer of BioNTech, was brought into this world on the 6th of March, 1967 in Lastrup, Germany. Like Dr. Şahin, she was also the daughter of Turkish immigrants. Her father was a surgeon from Istanbul who worked at a Catholic hospital in Lastrup, and her mother was a biologist. Before studying medicine, Dr. Türeci had hoped to become a nun.

On their wedding day, in 2002, the duo came into the laboratory in the morning before the wedding, then left to perform the ceremony, and then returned to work later that day.

The pair were at first centered around examination and instructing, including at the University of Zurich, where Dr. Sahin worked in the lab of Rolf Zinkernagel, who won the 1996 Nobel Prize in medication. 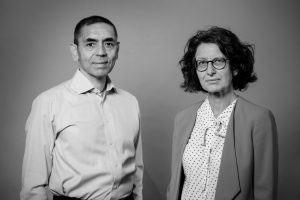 Three years ago, in 2018, at a conference in Belin, addressing a roomful of infectious disease specialists. Dr. Ugur Sahin made a bold statement. He claimed that his organization BioNTech, which at the time was little know, could quickly foster a vaccine in case of a worldwide pandemic, by utilizing its mRNA technology.

BioNTech was for the most part centered around malignant growth medicines. It had never offered an item for sale to the public. However, Dr. Şahin’s words were deemed prophetic.

Soon after, BioNTech and Pfizer announced the development of a vaccine against the coronavirus with an above 90% efficiency in preventing the disease within trial volunteers.

The startling announcement launched BioNTech and Pfizer Inc to the front of the competition to discover a remedy for an illness that was responsible for the deaths of more than1.2 million individuals around the world.

Regarding his work, Dr. Şahin said:

“It very well may be the start of the conclusion of the Covid age.” 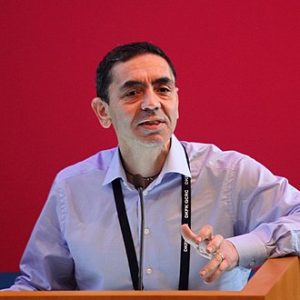 BioNTech started work on the antibody in January 2020, after Dr. Şahin read an article in the clinical diary The Lancet that left him persuaded that the coronavirus, at the time spreading rapidly through China, would detonate into an all-out pandemic.

Researchers at BioNTech dropped excursions and set to chip away at what they called Project Lightspeed.

Regarding the project, Dr. Şahin stated:

“There are not very many organizations in the world which have the limit and the ability to do it so exceptionally quick as we can do it – So it seemed not like a chance, yet an obligation to do it since I understood we could be among the main concocting an immunization.”

After BioNTech had distinguished a few promising antibody up-and-comers, Dr. Şahin inferred that the organization would require help to quickly test them, win endorsement from controllers, and offer the best contender for sale to the public.

Dr. Şahin convinced the American pharmaceutical company Pfizer, with whom the company had previously begun working on an influenza vaccine since 2018, to team up on the development of a coronavirus vaccine.