Muhammad Abdus Salam was the first Pakistani theoretical physicist, who, alongside Sheldon
Glashow and Steven Weinberg, became a 1979 noble prize laureate, for their contributions to
the unification of the weak and electromagnetic interaction between elementary particles.
Their theory is also known as Glashow-Weinberg-Salam theory.

He was born in Punjabi Muslim Family on 29 January 1926. He very early established a
reputation for his outstanding brilliance and academic achievements. He was a versatile
Scholar. He obtained a Ph.D. degree in theoretical physics from Cavendish Laboratory at
Cambridge. [2]
President Ayub khan gave him charge of a government post, and he expanded the web of
physics research and development in Pakistan. Salam played an influential and significant role
in Pakistan&#39;s development of nuclear energy for peaceful purposes.[2]
He died on 21 November 1996 from progressive supranuclear palsy, buried in Bahisthi
Maqbara. 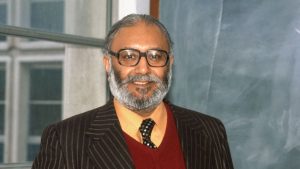 Salam was one of the first fellows of the Pakistan Academy of Sciences.
As a result of Salam’s contributions to particle physics, Punjab University awarded him an
honorary doctorate in 1957.

Upon becoming a Fellow of the Royal Society (FRS) in 1959, Salam was one of the youngest
members of FRS. [3]

Abdus Salam developed the mathematical concept of their work in 1968, along with Weinberg
and Sheldon Glashow. They proposed a theory that showed the unification of two fundamental
forces of nature, weak nuclear forces and electromagnetic forces. For this achievement, Salam,
Glashow and Weinberg were awarded the Nobel Prize in Physics in 1979, and Salam was
awarded the Noble Prize along with Glashow and Weinberg.

He had the honor of becoming the first technical member of PAEC.
As a result of his initiative in 1961, Pakistan’s first national space agency SUPARCO was
established, with Salam as its first director. He received the Hopkins at Cambridge University for
the most outstanding contributions to physics during 1957-1958.

He was honored with Sitara-e-Pakistan in 1959 by the President of Pakistan for his contribution
to science development in Pakistan.