Published by Abeeha Ibrahim on 18 October, 2021

Abdul Qadeer Khan was a metallurgist. The Western Intelligence Service recognized him as the Father of Pakistan’s nuclear bomb. He was a national hero to millions of Pakistanis. However, to the C.I.A., he was one of the most dangerous men on the planet He helped Pakistan to become the world’s first Islamic nuclear weapon power. 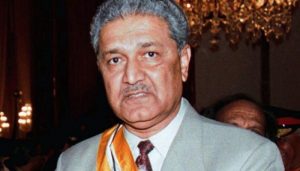 He was mainly motivated by the events of 1971, when Bangladesh, also known to be the East Wing of Pakistan, broke away to become an independent country following a bloody civil war. His objective in making the atomic bomb was for Pakistan to become stable as he did not want the reoccurring of the events of 1971. His important contribution to Pakistan’s nuclear program was the procurement of a blueprint for uranium centrifuges.

At that time, he was also charged with stealing it from Netherland however due to his and his team’s great efforts, Pakistan conducted its first nuclear test in 1988. Thus he successfully made Pakistan a nuclear state.  He became so famous at that time, that many schools, universities, institutes, and charity hospitals across Pakistan were named after him. However, success does not last forever.

He found himself in the international cross-hair after being accused of illegally sharing nuclear technology with Iran, Libya, and North Korea. The revelation that he had passed on nuclear secrets shocked Pakistan. After Khan’s confession on National TV, he was pardoned but remained under house arrest for years. During the days of his imprisonment, he was struck with prostate cancer, which he recovered from after surgery.

Dr. Khan looked like a typical retiree, wearing sandals and seated cross-legged on a sidewalk, denied involvement in nuclear proliferation. He was not unhappy with the people of Pakistan but he was unhappy with the hypocritical rulers.

He once said, “I don’t regret working for this nation but sometimes I wish I should have focused elsewhere. I should have pursued my education and have become a professor. I had a lot of offers.”

The hero of Pakistan died at the age of 85. 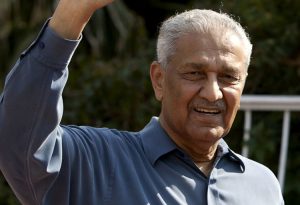 Abdul Qadeer Khan graduated in 1956 with a Bachelor of Science (BSc) in physics with a concentration on solid-state physics. From 1956 to 1959, Khan was employed by the Karachi Metropolitan Corporation (city government) as an Inspector of weights and measures and applied for a scholarship that allowed him to study in West Germany. In 1961, Khan departed for West Germany to study material science at the Technical University in West Berlin, where he academically excelled in courses in metallurgy but left West Berlin when he switched to the Delft University of Technology in the Netherlands in 1965.

He joined the doctoral program in metallurgical engineering at the Katholieke Universiteit Leuven in Belgium. He worked under Belgian professor Martin J. Brabers at Leuven University, who supervised his doctoral thesis which Khan successfully defended, and graduated with a DEng in metallurgical engineering in 1972. His thesis included fundamental work on martensite and its extended industrial applications in the field of graphene morphology.

The government of Pakistan presented him with the highest civil awards to acknowledge his research work. His awards include: 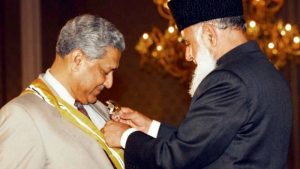