Ibn Sina (popularly known as ‘Avicenna’) was a great polymath with his contributions in medicine, psychology, pharmacology, geology, physics, astronomy, chemistry, philosophy, mathematics, physics, and other fields. He was also a poet, an Islamic scholar, Quran Hafiz, and theologian. His most important contribution to medical science was his famous book “Al-Qanun fi al-Tibb”, known in the west as the “Canon”. He made several astronomical observations and developed a venire-like means to improve the accuracy of the instrumental readings. In physics, his contribution included the study of various forms of energy, heat, light, and mechanics, as well as concepts such as force, vacuum, and infinity. 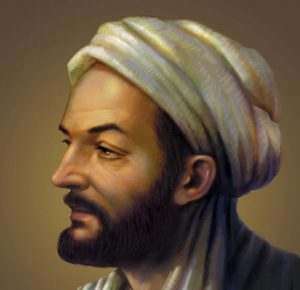 Avicenna was born around 980 in Afshana, a village near Bukhara. His father was a Samanid governor. At a very young age, his family moved to Bukhara where he studied Hanafi jurisprudence (fiqh) and medicine.  He read and memorized the entire Quran by age 10. He had exceptional intellectual abilities. He began to learn medicine at the age of 16 and became a famous physician at the age of 18. Avicenna began his writing career at age 21. He cured Nooh bin Mansoor, the King of Bukhara, from an illness from which all famous doctors had lost hope.  Then king wanted to reward him, but he only wanted permission to use the Samanid library, which was exclusively stocked.

When Ibn Sina was 22 years old, his father died. Then he left Bukhara and moved to Jurjan close to the Caspian Sea where he started teaching logic and astronomy. Here he met his famous contemporary Abu Raihan Al-Biruni. Later he traveled to Rai and so to Hamadan, where he wrote his famous book Al-Qanun fi al-Tibb. Here he also cured Shams al-Daulah, the King of Hamadan, for severe colic. At Esfahan, under ʿAlā al-Dawlah, he completed Kitāb al-shifāʾ, wrote Dānish nāma-i ʿalāʾī (Book of Knowledge) and Kitāb al-najāt (Book of Salvation), and created new and more-accurate astronomical tables. There he fell ill. A slave tried to poison him by adding a surfeit of opium. Weakened but he accompanied ʿAlā al-Dawlah on his march to Hamadan. On the way, he took a severe turn for the worse, lingered for a while, died during June 1037 A.D, and was buried in Hamedan, Iran.

He wrote three encyclopedias of philosophy. The first is al-Shifa (The Cure), which covers the natural sciences, logic, mathematics, metaphysics, and theology. It was in Latin and had a great impact on scholasticism. It was solicited by Juzjani and his other students in Hamadan in 1016. He lost parts of it on a military campaign but he completed it in Isfahan by 1027.

In Isfahan, he wrote the other two encyclopedias for his patron the Buyid prince ‘Ala’ al-Dawla. The first one is in Persian named “Danishnama-Yi ‘Ala’I” (The Book of Knowledge for ‘Ala’ al-Dawla). It closely follows The Cure, namely al-Najat (The Salvation). It was an introductory text for a layman. Later it became the basis of al-Ghazali’s Arabic book “Maqasid al-falasifa” (Goals of the Philosophers). The second one is al-Isharat wa’l-Tanbihat (Pointers and Reminders), a work that does not present completed proofs for arguments and reflects his mature thinking on a variety of logical and metaphysical issues.

Logic is a critical aspect of, Avicennan philosophy. His logical work followed Neoplatonism and he wrote nine books. In which he modified the Aristotelian Organon, which included the Poetics and the Rhetoric and Porphyry’s Isagoge. His views on logic demonstrated an important metaphysical approach that further led to Avicenna’s arguments in philosophical and non-philosophical subjects. For example, he argues in The Cure that both logic and metaphysics are required for the study of secondary abstract concepts like existence and time. His theology “the First Cause and the 10 intelligence” showed his devotion to God as Creator.

Avicenna is well known as the author of one important and influential proof for the existence of God. He rejected classical Muslim theories and said that the cosmos has no beginning but is generated by the divine One.

The argument runs as follows: “There is existence, or rather our phenomenal experience of the world confirms that things exist and that their existence is non-necessary because we notice that things come into existence and pass out of it. Contingent existence cannot arise unless it is made necessary by a cause. Therefore, the chain of contingent existents must culminate in and find its causal principle in a sole, self-subsistent existent that is Necessary. This, of course, is the same as the God of religion.” [1]

The second most influential idea of Avicenna is his theory of knowledge. The human intellect at birth is a pure potential that is actualized through education and comes to know. Knowledge is attained with the empirical familiarity of objects in this world. It is developed through a method of reasoning; observations lead to statements and so to abstract concepts.

According to Avicenna’s epistemology theory, the soul is independent of the body and capable of abstraction. This proves the modern philosophical notion of the self. It shows the Aristotelian base and Neoplatonic structure of his psychology. In his book Fi’-Nafs/De Anima (Treatise on the Soul), he said the first sense is common sense (al-hiss al-mushtarak) which fuses information from the physical senses into an epistemic object. The second sense is imagination (al-khayal) which processes the image of the perceived epistemic object. The third sense is the imaginative faculty (al-mutakhayyila) which combines images in memory, separates them, and produces new images. The fourth sense is an estimation (wahm) that translates the perceived image into its significance. The classic example for this is that of the sheep perceiving the wolf and understanding the danger.

Avicenna’s most famous book Canon is divided into five books.

The second book is a “Materia Medica,” third book covers “Head-to-Toe Diseases,” the fourth book covers “Diseases That Are Not Specific to Certain Organs” (fevers and other systemic and humoral pathologies), and the fifth book covers “Compound Drugs” (e.g., theriacs, mithridates, electuaries, and cathartics).

Unfortunately, his original clinical records were lost which he used as an appendix to the Canon and only an Arabic text has survived in a Roman publication of 1593.

The Avicennan Tradition and His Legacy

In the Latin West, his metaphysics and theory of the soul had an important influence on scholastic arguments. After him, al-Ghazali (d. 1111) and al-Shahrastani (d. 1153) claimed that no serious Muslim thinker could ignore him. They regarded Avicenna as an important representative of philosophy in Islam. His major works, “The Cure” and “Pointers”, became the basis for the philosophical curriculum in the madrasa.